A Thai massage lasts between 1 and 2 hours .One hour is very beneficial, two hours is even better! The practitioner will use pressure to relax and heal the entire body.

This Pressure can range from very gentle, to very deep, firm pressure, as far as the client wishes to take it.

Sometimes the client may fall into a very relaxing sleep during the massage, and wake refreshed and with new energy.

The massage may be done with the palm of the hand, the thumb, the elbow, or the feet, depending on the depth of pressure required.

The practitioner moves in a highly skilled way, using their body weight rather than mere strength, enabling them to apply whatever pressure the client needs.

The massage is to the energy point on the body, thus releasing the trapped energy in your body, so that it may flow wherever it needs to heal you.

The practitioner also applies stretching movements to relax, energise and open up your body. These movements are not exercises; you remain passive while the stretches are done for you.

This is a highly enjoyable experience, which is very different from the hard work of stretching in an exercise class. The stretches will increase your flexibility and your body's tension. The bones and joints are never directly worked on as they are vulnerable and considered sacred in Thai massage.

The area around the bones is worked on instead. You must tell your practitioner of any serious injuries, conditions or illnesses which you have. They can then avoid any pressure, which might be harmful, and focus on areas that will help to heal you. 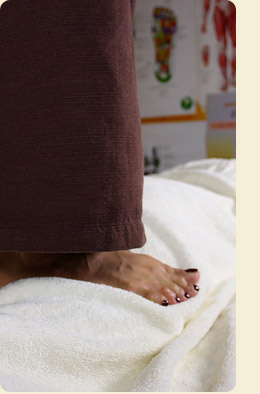 Thai massage originated many thousand of years ago, and its roots are in the ancient Indian practice of Ayurvedic medicine.

The stretching movements of Thai massage can be seen to be closely related to yoga. The pressure points and energy lines of Thai massages known as "Sen" follow the flow of energy through the body's form and are similar to the energy channels of Chinese Acupuncture and Japanese Shiatsu. However Thai massage, which is called "Traditional massage", in Thailand is a unique and very effective type of healing, different from other types of massage.

The legendary founder of the art of Thai massage is Jivaka Kumarabhacca. He was a physician for the first Buddhist priests and a close friend of Buddha. The original texts of ancient Thai massage were recorded in the sacred pali language of ancient Buddhism.

Most of the ancient medical texts were destroyed in 1776 in the Burmese invasion.King Rama III had the surviving traditional knowledge carved into stone inscriptions in 1832 which were set into walls of the temple in Bangkok called Wat Poh. By this means he hoped to preserve the knowledge against future disasters, for the benefit of future generations.

Until recently the art was taught mainly to monks in the Wats (Buddhist temples) of Thailand.Now it is generally taught at special Thai massage institutes.